21. When Violence Subsides, The Artist May Enter 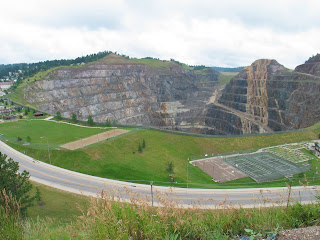 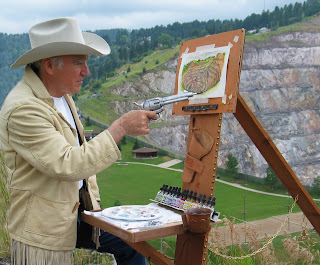 This monument to man’s avarice can be found just outside of Deadwood in Lead, (Leed) at George Hearst’s Homestake mine. It was the largest gold producing gold mine in the world. It ran continually since founded by George Hearst back in 1879 up until 2001 when it finally stopped it’s mining operations. The damage his mining machines have been inflicting on these hills has now stopped. The violence is finally over. I climbed up on one of its large slag hills overlooking the open pit and with color and brush attempted to lift an image from the wounded spirit of these hills and transfer it to paper. What I take I take for art’s sake. I do not seek money, wealth or power as George Hearst did. I do not intend violence against the spirit that dwells here. I will leave the Black Hills as I found them. Let the spirit of the Black Hills judge who is more worthy to speak of its riches: the businessman or the artist.
Posted by artist-link.blogspot.com at 8:03 PM