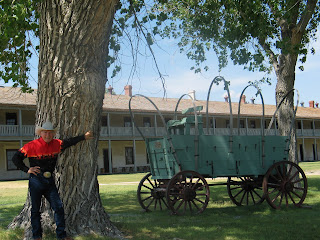 It probably took Wild Bill and the Utters 10 days to get to Fort Laramie as oxen pulled wagon trains were painfully slow. They were lucky if they went 9 miles in a day. Small forts like these were established in the west to protect settlers from hostile Indians. When the gold fields opened up in the Black Hills soldiers from this fort patrolled the main trail between Cheyenne and Deadwood.

It was here where Wild Bill first met an unknown rough and ready foul mouthed drunken ex-mule skinner named Jane “Calamity Jane” Carnery. She happened to be working on a ranch nearby and when she found out that Wild Bill was on his way to Deadwood she quit her job and hitched a ride. She didn’t know it at the time but she was entering America’s history books as she entered the Black Hills.
Posted by artist-link.blogspot.com at 7:58 PM