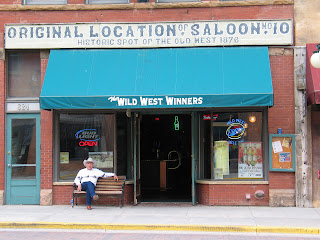 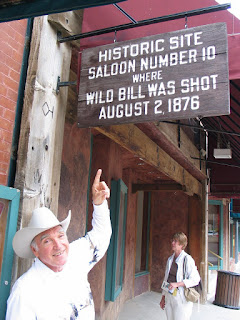 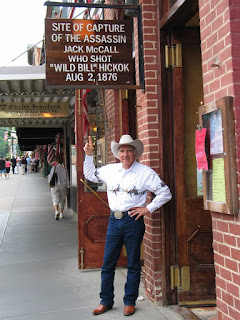 Wild Bill had only been in Deadwood about three weeks when on August 2, 1876, at about four in the afternoon, Jack McCall walked up behind him while he was playing poker and shot him in the head. That was the end of Wild Bill’s earthly life. However that one shot awakened Fama and she arose, put trumpet to lips, and with a loud blast announced Wild Bill's arrival into the world of the famous.
It all happened here at the No. 10 Saloon.
Well, this isn’t exactly the No. 10 anymore; it’s the Wild West Eagle Bar – serving Bud Lite on tap. The original No. 10 burned down in the big 1879 fire in which 300 buildings burned to the ground. The No. 10 saloon subsequently moved up the street to some new digs. However, these signs make it clear that this was the actual spot where it all happened. There is also a sign up the street to show where Jack McCall, his killer, was captured.
Posted by artist-link.blogspot.com at 6:25 PM