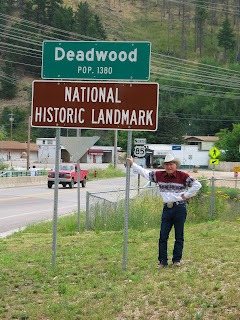 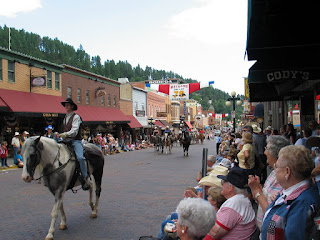 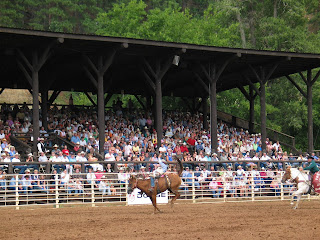 Here I am in Deadwood, July, 2007. In 1964 Deadwood became the first community designated as a National Historic Landmark. It’s come a long way, image wise, since its lawless, rough and tumble days as depicted in the HBO series, Deadwood. But even with its National Historic Landmark status its population is still just over one thousand souls, about ten percent of what it was during its gold rush heyday. I guess when the earth has nothing more to offer, some people don’t hang around, they just move on.

But Deadwood is far from a ghost town; over three million tourists come through here every year. Tourism increased around 12 percent because of the popularity of the Deadwood series. Deadwood Wild Bill Hockok days, Kool Deadwood nights, Deadwood motorcycle rallies, and the Days of 76 Rodeo, which is going on just now, are big tourist draws. And of course in 1989 limited gambling was allowed in Deadwood so that too brings in the people. Right now the town is full of cowboys, …and not a miner in sight,… chalk up one for the cowboys.
Posted by artist-link.blogspot.com at 6:39 PM