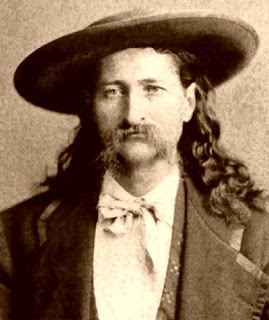 Wild Bill was a prodigy of sorts, even as a boy of ten he showed a remarkable ability with a gun. As years passed his reputation as a marksman grew, - the fact that human beings were at the other end of that marksmanship made his reputation grow even faster. Most people stayed clear of Wild Bill when he came to their town, - least they provoke him to demonstrate his ability on them.

Wild Bill was custom made for the dime novel crowd; it was absolutely top of the line stuff. He became wildly popular as a real live western gun slinger. He joined Buffalo Bill on stage in New York where they played to packed houses of naive easterners. Although amateurish and awkward Wild Bill did his best to be “pretend real” but the charade soon got the better of him. One night he drew his gun, took a few shots at the stage floor and walked off, - never to appear on stage again.

His killer reputation made life difficult for him, even if he did say that he never killed a man who didn’t need killing. It’s not easy to make an honest living when people think all you can do is shoot people. The future looked dim. The only way left for Wild Bill to make a living was to be a town marshal. But as the trail drives diminished and towns began to look for less violent ways to uphold the law, that option began to fade. Depressed, he turned to drinking and gambling.

In 1876, at the age of 48, and going blind, Wild Bill shows up in Cheyenne, Wyoming, - he was on his way to his kind of town, Deadwood, a lawless mining camp nestled in Deadwood gulch about 250 miles north east, in the Black Hills.

Posted by artist-link.blogspot.com at 6:38 PM